This is the fifth episode I’m reviewing–from five different seasons, mind you–and the third that features Boston Rob. Frankly, given how many times the guy has played I’m surprised he isn’t in six of the first five episodes I review. It’s like Survivor whiplash, going from domineering manipulator Rob in the Redemption Island endgame to cocky underdog Rob in the All-Stars premiere to sensible voice of reason Rob in this second episode of Heroes vs. Villains.

Stuck on the “buffoon tribe” for a third time, Rob has to exert himself in order to keep his lazy, uncooperative team functioning. But his newfound gallantry proves to be too much when Jerri discovers Rob collapsed in the forest. (I believe it’s been proven that this scene was recreated for the cameras, and, well, let’s just say Jerri shouldn’t use it on her acting reel.) Jeff Probst rushes to the scene, because even outside of Survivor, he’s Rob’s emergency contact. The medical team assures Jeff that Rob looks worse than he actually is; he simply has the flu. He celebrates this diagnosis by proceeding to hug his tribemates.

Once a villain, always a villain.

While Rob is infecting his tribe with a Samoan virus, Stephenie is infecting the Heroes with the bad mojo that took down the entire Ulong tribe in Palau. In case you don’t remember that season, don’t worry; James will remind you about 600 times over the course of this episode. He also reiterates his immunity challenge mantra, “One voice!” over and over. He even pays homage to his favorite China catchphrase by not eating an apple at any point during this episode.

James isn’t the only person frustrated with Stephenie. Rupert too has a problem with her because–get this–he thinks Stephenie would align with people who would take her further in the game. Every former Survivor contestant watching at home was probably like, “Whoa, why didn’t I think of that?” Stephenie has an alternate theory for why Rupert dislikes her, that she threatens his popularity. 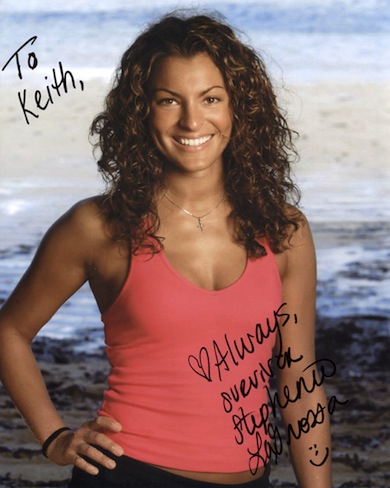 Don’t worry, Rupert, you can get Stephenie’s autograph after the show.

When the Heroes lose, Stephenie becomes an easy scapegoat, but leave it to Colby Donaldson and Tom Westman to ramp up what was already a very exciting episode.