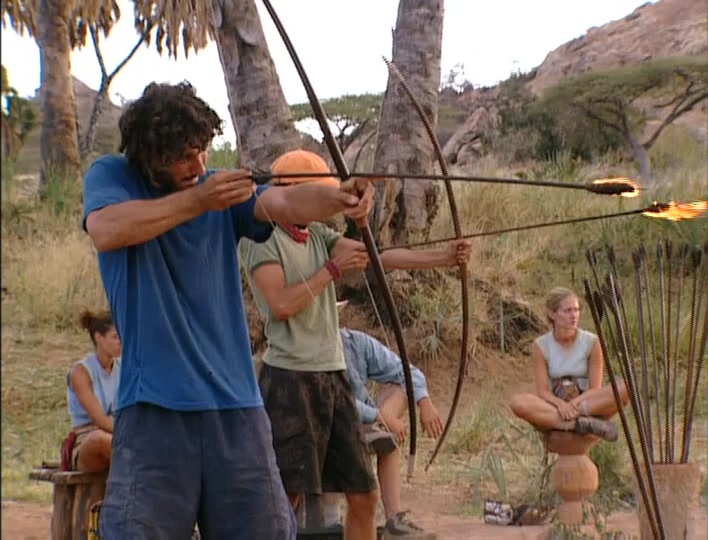 We’re officially in old-school Survivor territory here. Like, super-old-school. Which is worrisome for me. I haven’t rewatched any vintage Survivor episodes in well over five years. Yet I still stubbornly remember this as the “best” era of the show, a simple time when alliances stuck together and players were voted out because they got the most votes, not because they were the only person lacking some sort of trinket that guaranteed them immunity. Ah, those were the days. But what if the content that was so compelling in 2001 proved to be slow and dull in 2018? What if I found these episodes (gasp) boring?

Color me pleasantly…not surprised, more like relieved. Funnily enough, the sixth episode of Africa was one I remembered being a bit underwhelming, because I had reduced it in my mind to a tedious drag of the former Boran members trying to figure out who from Samburu had received past votes. That does take up a good chunk of the episode, but it was much less repetitive than the chore of watching people shove their hands up trees to find idols.

Why haven’t the producers thought to hide an idol in a beehive yet?

Since this is the most prevalent episode where the past votes tiebreaker comes into play, I figure I might as well dive into the pros and cons of this sensible but ultimately unsatisfying method. As a purist, I agree with the idea that Tribal Council should be resolved with a vote if at all possible. But from a dramatic standpoint, it does sort of eliminate the tension if viewers and players know exactly how a deadlock is going to play out. There’s nothing like the threat of a rock draw to get people to switch their votes at the last minute, even if it’s against their best interests. But in these days of split votes and shifting alliances, there’s a certain strategic intrigue in having the ability to slowly but surely pile votes onto someone in the hopes of making a move down the road. I wouldn’t be opposed to the producers giving this another shot, but I do love me a good rock draw.

Honestly, this is a really, really strong episode given the complete lack of surprise at the outcome. Things kick off with the aftermath of Jeff Probst’s warning at the previous Tribal Council that the merge may not happen exactly as the players expect it to. Apparently Boran rationed their food supply anticipating a merge around day 20, like in the first two seasons, but the swap has forced them into uncharted territory. Spoiler alert, the merge happens exactly as the players expect it to. What does take the Boran tribe by surprise, though, is the laying of a single egg by the chickens they’d won in the previous episode’s reward challenge. This scene is an absolute classic, with Clarence, the self-proclaimed “man’s man food critic,” leading the charge to eat the chickens while his tribemates want to hold out for eggs. His simultaneously amused and defeated reaction upon seeing that minuscule egg is entertaining enough on its own, but Kim Johnson justifies her casting with her great “Damn those chickens!” impression. They end up eating a chicken anyway, in a scene that I can only imagine is inspired by 80s porno, lit by the fire and complete with an oddly sexy jazz score.

As they enter the reward challenge, Lindsey urgently mutters, “Silas is gone! Silas is gone!” to fellow Mall Rats Brandon and Kim P. This lights a fire under the trio, who know that if they face Tribal Council, a tie is likely, and since they assume the former members of Boran will pick Brandon as the likeliest to have votes against him (he doesn’t), they need to decide between Lex, Kelly, and Tom as their target. Whoever they pick will presumably face off against Brandon in a test of African trivia. Kelly is ruled out because she is, as Kim puts it, a “walking thesaurus,” which is certainly sound logic. When it comes to African trivia, Kelly must be knowledgeable, learned, wise, informed, and erudite.

After losing a simple but cinematic immunity challenge (I love the rapid-fire editing, and yes, pun definitely intended), the new Samburu faces Tribal Council. It seems pretty straightforward, with the Mall Rats setting their sights on Tom, and the former Boran members aiming for Brandon. But wait! Kelly picked up on Kim J’s signals that Lindsey has past votes and later overheard Brandon explicitly saying so. And here’s where things get really complicated, because Lindsey is pissed that Brandon may have ruined her game, so she pitches the idea of joining Boran to eliminate him. At an emotional Tribal Council, she chooses to stay loyal, which was the expectation back in those days. I have to say, I miss when playing Survivor presenting an ethical dilemma for each contestant. Sure, I love watching players outsmart one another with clever maneuvers, but there’s something inherently fascinating watching people wrestle with their own morals for the sake of competition and money. We’ve been conditioned over the years to discount the human factor, chastising “bitter” jurors and championing those who make “big moves.” But sometimes the biggest move is staying true to yourself even at the risk of losing the game.

Much like Jerri before her, most viewers despised Lindsey in 2001 (I was one of them), but she’s actually very tame in retrospect. Heck, I would say she’s downright likable, at least here in her boot episode. Have I gotten soft in my old age? Oh dear. Please don’t let me become one of those people who cries watching the family visit episodes.

I mean, this made me cry but not for the reasons the producers intended.